Salome My Next Character 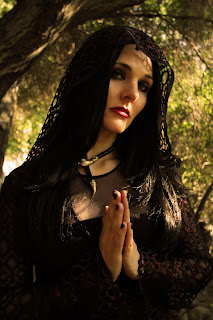 I recently got cast in the role of "Salome" she's a dark, power hungry character in Joaquin Montalvan/Sledge Hammer Films next picture. This is a promotional picture taken of my character...I kinda think she looks like an evil "virgin Mary" from those Catholic church pictures of her posing in prayer? I'm not allowed to say the name of the movie yet. But I do know what my character will be doing in the film, and I've had my costume fittings so I know what I'll be wearing. I'll keep you posted as I know.
Posted by Katherine Norland at 12:01 PM No comments: