Here's a bit of an update on the audition and call backs I had for the "action/comedy" show Les Femme Fatals. I had no idea what I was getting in to. But it took no time at all for me to fit right in. It started out with at least 120 girls, but right now, whether they weeded them out or the girls couldn't hack it, it's now down to about 30 of us (I made the cut). Soon the 30 of us will be competing for 8 spots on the initial show.

I've seen 2 different proposed renditions of the 8 different characters costumes. Here are the latest two for "The Patriot" (the character I will be trying out for) and also for her enemy "Fatima". Whoever wins those character spots might be wearing something like this. 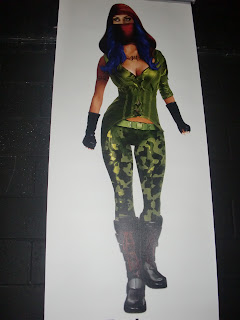 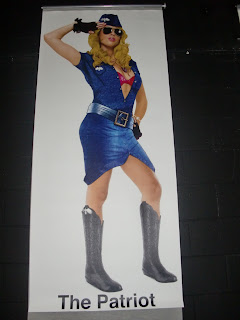 They have been training us in Wrestling a couple of different types of Martial Arts as well as kick boxing. I'm actually amazed at some of the things my body has been able to do...either that it hasn't done in a really long time, or that I've never dreamed of doing (hello flying moves off the third rope!)

I'm now asking myself, how did I get so brave? This timid little chickadee used to be so shy she couldn't even order pizza over the telephone, used to have panic attacks in crowds, used to run and hide in fear of confrontation, used to avoid anything physical (except dancing) but especially sports! I wouldn't even watch them...let alone participate?


Now I find myself in the running to become an Action Figure? An action Femme Fatal? Whose life is this anyway?

Stay tuned, I have a feeling the adventure has just begun!
Posted by Katherine Norland at 7:54 AM No comments: