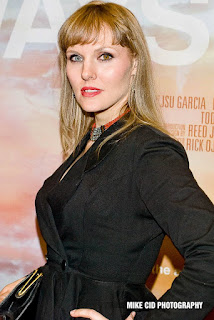 I was invited to "The WayShower" film Premiere last night which starred Oscar Nominees Eric Roberts and Sally Kirkland, Peter Stormare and other talented cast from both LA and Utah where it was filmed. 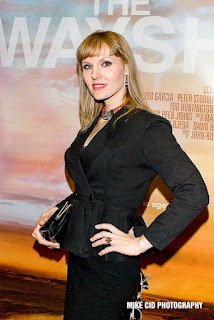 Photographer Mike Cid was kind enough to send me a picture taken on the red carpet. It was a 'spiritual' film of a mans search to find his way and reconnect with "The WayShower" and figure out that he had 3 self's so to speak, a carnal side, a cerebral/emotional side/ as well as a higher side. 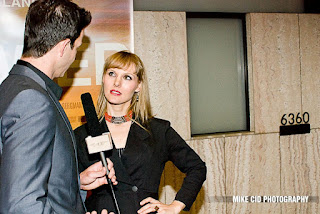 The filmmaker Jsu Garcia, who also starred in the film wanted us to leave with a message and a thought of how we can better live this life here on earth, seeking self acceptance and not just living for the acceptance of others. Nina Bergman played a real kick butt vixen in the film as well.
Posted by Katherine Norland at 6:20 PM No comments:

I've Got A Delivery For Ya 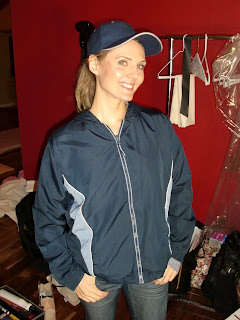 I had auditioned for a different part, which went to another gal.

I turned my face in this photo so you could see the bit of dirt and blood that was left on my face after the make up artist wiped most of it off. I won't tell you how it got there, you'll have to rent the movie.

The producer told me later she was impressed that I could hit my mark each time falling backwards off of the step, it wasn't the first time I'd done my own stunts, I think my background in dance and gymnastics still helps me, because I'm aware of where my body should land; when you're on a balance beam an inch or two can make a difference to whether you "Stick it" or not.

Evan Jacobs wrote the script and also directed it. http://www.imdb.com/name/nm0414405/

The lead Joseph Nassar has about a bazillion talents, he starred in this film, but also writes, produces and does tons of other industry stuff. Just take a look at his long list of credits on IMDB. http://www.imdb.com/name/nm0621964/

All in all I had a blast and look forward to the wrap party next week.
Posted by Katherine Norland at 11:28 AM No comments: